SuperMarioGlitchy4 Wiki
Register
Don't have an account?
Sign In
Advertisement
in: A to Z, Characters, Minor Characters,
and 12 more

Derrick - being a hushpuppy

Alex - Being annoyed by Derrick

Derrick - "You know sometimes I like to crawl in a big ball and pretend I'm a hushpuppy."

Not to be confused with Alex from Minecraft

Alex and Derrick are one time characters in the SMG4 series.

They are two characters who have so far only appeared together in the video "SM64: ṩṩἔᾗмὄḋᾗᾄʀ 6.64(100k special Qna Edition)". Derrick was telling a guy named Alex (his friend) that he looks like a hushpuppy, annoying him. He also tells him that he sometimes pretends to be a hushpuppy. Alex then replys saying "I'M ENJOYING A TREAT, DERRICK!!!" as he gets incredibly annoyed. 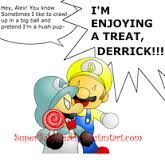 Derrick: "Hey, Alex! You know sometimes I like to crawl in a big ball and pretend I'm a hush pup-