SuperMarioGlitchy4 Wiki
Register
Don't have an account?
Sign In
Advertisement
in: A to Z, Characters, Minor Characters,
and 5 more

SMG4: Lost In The Woods

Arin Joseph Hanson (AKA Egoraptor) (born: January 6, 1987) is a YouTuber and one of the founding members of Game Grumps. He usually plays the games with his close friend/co-star, Dan Avidan (formerly JonTron from 2012 - 2013). Both do commentary as they play. He has made various cameos in SMG4's videos.

He also appears in a Meta Runner episode, Fast Food Fight. His voice impressions of Toad are used as voice clips for him. 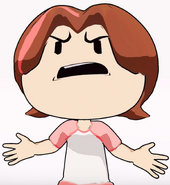