SuperMarioGlitchy4 Wiki
Register
Don't have an account?
Sign In
Advertisement
in: A to Z, Characters, Sunset Paradise,
and 9 more

People who break the law

Was revived by the Pheonix Egg after being shot by Benedict and finally claimed the sheriff's badge.

Auri Bori is an Aura Bora, Meggy Spletzer's partner, the sheriff of Port Aurora and the main deuteragonist of Sunset Paradise. In the penultimate episode, he sacrificed himself to save Meggy from the laser shot by Benedict at the top of the tower and later dies. In the final episode, he was revived thanks to the Phoenix Egg.

Auri is light blue and spherical, having simple stick arms and legs and small spheres for hands. He has eyes, a mouth, and eyebrows, all of which are black and white, but he lacks a nose. He wears a brown belt with a large, yellow star badge (referencing cowboy sheriffs) in the center, and a salt shaker in a holster next to it. He also wears brown, oversized cowboy boots, a red octopus hat about the size of his body with black crosses for eyes, a band aid on his right cheek and three darker blue spots near his left eye, which are usually covered entirely or in part by his eye. He possesses a spear that he uses as a weapon against violent criminals (though he never hit anything with it until episode 2); it is made of a brown stick, and a point resembling ice cream.

Auri is described as being happy-go-lucky and rather headstrong, with Meggy remarking that 'his heart is in the right place'. Despite trying to control the peace and harmony of Port Aurora with good intentions, Auri is often subjected to danger and chaos due to having a sense of recklessness and overconfidence against the hands of criminals.

While Auri is a little nuts and somewhat obnoxious, he is in the right state of mind as he wants to ensure that Port Aurora remains free of bad behavior and criminals, he just showed it in an immature way. He doesn't seem to like cursing or even words that he considers to be remotely offensive, considering 'tardy' to be a foul word. Auri is shown to be both brave and selfless; this was shown when he was willing to distract the Spud Buds in order to allow Meggy to escape, even while knowing that he would most likely die as a result.

That being said, he did have a few clever moments. He quickly figured out that Duke loved music while interrogating him and uses this to convince Duke to help him and Meggy out, which nearly worked. He also figures out that he could use his spear to prevent himself from being sucked into a vacuum cleaner.

SUNSET PARADISE - EP 3: Reservoir Cats reveals that he's secretly doubts himself and that he's worried about what his now deceased grandfather would think about his pathetic grandson. However, Auri encourages himself up by telling the hallucinated version of his grandfather that he has his supervisor to help him out to make up for his weaknesses, which Meggy overhears, allowing her to overcome her own insecurities a lot easier.

In SUNSET PARADISE - EP 4: Cat-sino Royale, Auri is revealed to be smarter than he lets on. As he secretly watched Meggy and Whisk pull off their heist while wearing various disguises and was able to capture the latter by putting a shock chip in her mask. He may also have some feminine personalities that he prefers to keep secret, as when Meggy asked why he dressed up was a woman at one point, he ignored her and continued on with his explanation.

In SUNSET PARADISE - EP 7: What Comes Next It starts with Auri and Meggy coughing after they survived the explosion. When Auri tries to take down Benedict himself, Meggy warns Auri, and then their friendship is broken when Auri calls Meggy "tourist". When Auri tries to fight the Goonies, he nearly gets beaten up, until Meggy comes to help Auri. Then Meggy stated that when reckless, impulsive, & overconfident it doesn’t end well, he didn’t realize it until now. After Meggy gets locked down, Auri was able to cover as Sir Benedict Cumbersnatch when he acts like him using a ice cream, and he was able to get 2 of the Goonies unconscious. At the end of the episode, Auri and Meggy become friends again, then get interrupted by the bell of the Phoenix Festival, where Auri Bori runs to.

In SUNSET PARADISE - EP 8: Mad Meggy, he showed to have great knowledge of the Funky Fource due to being a lifelong fan. That is, before he became aware of their true colors.

In SUNSET PARADISE - EP 9: All Fall Down, Auri dies near the end of the episode because he was shot by the laser beam by Benedict in order to save Meggy.

In SUNSET PARADISE - EP 10: Rebirth (FINALE), Auri told by his grandfather that he has the desire to protect people whilst in the in between. After he gets revived by the Pheonix Egg, Auri becomes the sheriff of Port Aurora.

Don't think too lowly of this blue ball, throughout his adventures, he's proven to have grown some advantages.

As an Aura Bora, Auri is pretty weak. While he does try to carry out his job as the town's only "sheriff", he's been described to "have no idea what he's doing" by the show itself and lacks any sort of physical abilities, and he can't even knock Yam over with a jump attack. As revealed by Auri himself, most Aura Boras are weak, like himself. As the series progresses, however, Auri has shown signs of a decrease in incompetence, as he's now able to throw punches.

In some point in his life, he became the unofficial sheriff of Port Aurora, but he wasn’t a very skilled and professional one since he only gives tickets to inhabitants of Port Aurora. That is, until he met Meggy Spletzer. He offers her to live with him at his house after the Spud Buds stole her suitcase in SUNSET PARADISE - EP 1: PILOT. In SUNSET PARADISE - EP 2: The Silence of the Yams, Meggy teaches Auri stealth & upper body strength. With these skills learned, they teamed up to capture the Spud Buds & Whisk but failed to fight off the Funky Fource. It was then that Sir Benedict Cumbersnatch revealed himself where it was revealed that he killed Auri’s grandfather, Aloysius Bori. Benedict then traps the duo in a cell where he left a bomb for them. Benedict thought that they were dead, but in SUNSET PARADISE - EP 7: What Comes Next., it was revealed they survived in a vacuum that was conveniently coated in titanium. The duo then head to the Borealis Lighthouse only to find out that Benedict was expecting them they climb their way to the top. He manages to capture Auri and got his Goonies to beat him up, but Auri manages to steal the egg. However, Benedict had other plans. Just as he was about to kill Meggy, Auri sacrifices himself to save her, but in the process, gets fatally shot by the lasers, much to Meggy’s horror & anguish. In his dying breath, a weakened Auri tells Meggy to save the Phoenix Egg whilst a grief-stricken Meggy assures Auri that the two of them would get through this together. Auri states to Meggy that they got through this ordeal as partners, & with that, he passes away in her arms, devastating Meggy. However, in SUNSET PARADISE - EP 10: Rebirth he was revived thanks to the Pheonix Egg. Auri also took the badge of the sheriff from Benedict and officially became the sheriff of Port Aurora.

Following these events, Auri later appeared in the SMG4 Christmas Special 2021 when Meggy contacted him to wish him a merry Christmas. 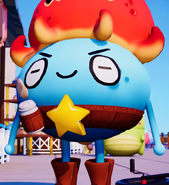 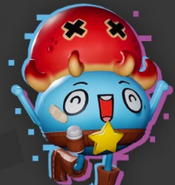 Auri as he appeared on the GLITCH channel's banner at launch, prior to Sunset Paradise's reveal