SuperMarioGlitchy4 Wiki
Register
Don't have an account?
Sign In
Advertisement
in: A to Z, Characters, Males,
and 12 more

SMG4: If Mario Was In.... Friday Night Funkin

Rapping
Hanging out with GF
Winning

Boyfriend is a reccuring character in the SMG4 series and Sunset Paradise. He's the protagonist of the Newgrounds rhythm game Friday Night Funkin.

SMG4: If Mario Was In.... Friday Night Funkin

He was facing off Daddy Dearest in a rap battle until Mario accidentally interrupts him, causing him loses the rap battle. After he convinces Mario to help him on getting Girlfriend back, he tells Mario that the only way to save Girlfriend is he has to defeat Daddy Dearest by beating him in a rap battle, so he decides to teach him rapping first. Now that Mario was ready he challenges Daddy Dearest and eventually wins. However, Daddy Dearest refused to lose to him and he summoned his minions to defeat Mario, but Mario recruited a team of his own rappers and defeated them. Finally, after Daddy Dearest becomes powerless and Parappa the Rapper got freed ter Mario and his team won, Boyfriend and Girlfriend hugs now that they were together again, they were about to kiss until Mario interrupted them asking if can they have now the Spaghetti Lovers Club.

At some point, Boyfriend made a quick visit to Port Aurora to rap against the Funky Fource so that he could be with Girlfriend, suggesting that this happened before SMG4: If Mario Was In.... Friday Night Funkin. He teamed up with Meggy Spletzer to win.

When Mommy Mearest cursed Mario and his friends to endless Friday Night Funk, Mario went to seek help from the Boyfriend and the Girlfriend to help them beat Mommy's gang in a rap battle to break the curse.

SMG4: The Other Universe

Boyfriend makes an appearance alongside many other Newgrounds character in the Toytoy kingdom. It was revealed that he was still a baby at that time. While helping everyone escape, SMG2 grabs Boyfriend to throw him in the back of his truck.

He appears in a reimagine of If Mario Was In Friday Night Funkin where he sings a random song (If you know the song's name, please replace it with it). In Mario's turn, he sings All I want for Christmas is the DK Crew, causing Boyfriend's ears to burn as he attempts to cover them while screaming in agony.

He appears dancing with a Goomba in a Omnia Christmas Show. 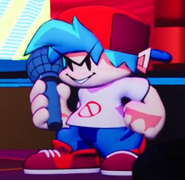 Boyfriend's game over and unused sprites on the sprite sheet of the FNF mod.