SuperMarioGlitchy4 Wiki
Register
Don't have an account?
Sign In
Advertisement
in: A to Z, Characters, Minor Characters,
and 6 more

"To Infinity and Beyond!"

Buzz Lightyear is, with Woody, the main character of the Pixar "Toy Story" Movies. He's a toy space ranger hero brought to life. He only appears in tree episodes.

In this blooper, Buzz Lightyear makes a cameo appearance when a guy tries to rob the bank, but is stopped by several Teletubbies. Buzz then proceeds to state that "he is a 15-year-old girl," much to the guy's dismay. In SMG4's bloopers, he appears in Gnostic form.

SMG4: Mario goes to the dentist

Appears as a toy in the dentist. 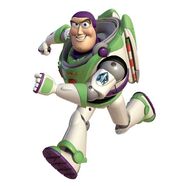