SuperMarioGlitchy4 Wiki
Register
Don't have an account?
Sign In
Advertisement
in: A to Z, Characters, Minor Characters,
and 11 more

He works at a maid cafe where Meggy and Tari took Fishy Boopkins there to cheer him up.

Him and Shrek twerk for Bob Bobowski.

SMG4: Mario Waits in Line For Some Spaghetti

He appears as a background character, being seen among the people seen waiting in line for the bank.

He makes a minor appearance as a playable character in Super Smash each other in the ass Bros..

Tari used Inkweaver to make a copy of Carl to seduce Axol as a prank.

SMG4: Lord Of The Memes

He appears in Mario's mind dancing with Shaggy Rogers. He later appears at Dashcon as a background character.

He is a robot being made by SMG4 until Mario and Luigi bump into him, breaking him.

There are multiple that mock Mario.

He appears behind a tree, scaring Mario.

He laughs at SMG4 crushing Mario.

SMG4: If Mario Was In Meta Runner

Carl Can be seen Inside Boopkin and Whimpu's Cafe, He seems to be gay for Whimpu, he is seen chasing whimpu near the end of the Hotel Ad, beating up a bunch of Nostalgia Critics When One of them Touched Whimpu, and also Being Excited as Whimpu dances.

He is run over by SMG4 and Mario while telling a baby not to play on the street.

He is summoned by Hugh Neutron to attack Mario.

He is seen being summoned by Maestro Mano. He later appears in a cage by Jimmy Netron.

He is one of the many contestants. He is eliminated after breaking a glass bridge.

He is seen watching a Christmas musical at Omnia Academy. 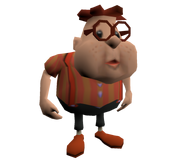 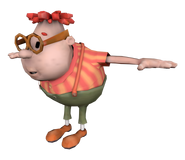 The model used in If Mario Was In... Nickelodeon.