To kidnap Tari and discover her power (partially succeeded, but later failed)

Shot by Masa Shimamoto after his arm glitches out; controlled by Dr. Sheridan

Not much is known about Lucks' past, but what is known is that he was the one who invented the titular Meta Runner arm.

He became the insanely popular CEO of the world renowned gaming tool production company, TAS Corp.. He was even associated with authorities and soldiers. However, he was secretly performing illegal acts into becoming rich and powerful.

He had his own team of Meta Runners manufactured by his company, led by Masa Shimamoto, and includes a range of people including Belle Fontiere and Lucinia Porter. He also had scientists working on other products; one of them was Dr. Sheridan, who struggles the most.

Eventually, he discovered that an explosion had taken place in Sheridan's lab, though Lucks believed that the scientist intentionally caused it to cover up his mistakes. On that same day, Lucinia disappeared. When he investigated the site of the accident, he discovered Lucinia's body, and discovered that she was still alive, albeit barely. Lucks ordered his scientists to preserve Lucinia in a human pod, which kept her stable. Unbeknownst to Lucks, however, fragments of Lucinia's consciousness was separated from her body and took the form of a trail of glowing purple glitter.

Masa suspected that Lucks was behind her presumed death, and hacked into his files. However, Masa was eventually caught and decommissioned from TAS Corp..

For a whole year, Lucks, Belle, and his team had been fighting a rebellion led by Masa, that consists of Lamar Williams and Sofia Porter, two others whose lives were "destroyed" by him.

One day, he was disappointed at Belle's failure on the speedrun tournament on Ultra Jump Mania. He and Belle later discover Tari's ability to transport her conscience into video games. He orders the TAS Corp. scientists into the room for experimentation. He attaches a controller into the game, and plays as a discolored version of Theo. He tries to make conversation with Tari about her greatness, while having a tracker placed inside her Meta Runner arm. Despite putting her in pain, he chose to keep going forward, saying that pain is an obstacle.

He accidentally causes Tari to break herself out of the game and bring Theo to life. He tries to apologize to Tari, but she refuses and walks away, with Theo calling him a "final boss that would be killed later". A guard attempts to block the path, only for Theo to throw a coconut in his face.

He later tracked Tari and Theo down at The Hive, and sent Belle and a few soldiers to capture them. He drives after the transport van that holds Tari and witness Lamar Williams and crashes his car into it. A car chase is initiated as he allows Belle to drive with a Bluetooth controller. At one point, she accidentally crashes the car, much to Lucks' frustration. When the police are about to get them, he contacts the police chief to call off their duty, revealing his connections to other authorities. He witnesses Tari's ability to evade a barrier of TAS Corp. soldiers. That's where he says his famous line "I want HER", vowing to gain Tari's power.

He later instructs Belle to find information about Project Blue at the laboratories, since Tari has a similar logo. Meanwhile, since he can't track Tari down anymore, he uses Theo's cartridge to hack into the latter's eyesight. A traumatized Belle reveals the footage she found to Lucks, showcasing the incident of Dr. Sheridan and Lucinia; this genuinely shocks and horrifies Lucks, realizing that he was wrong about his assumptions of the doctor. Later on, he finds out about the plans of MD-5.

At the big Tempest competition, he had his team of Meta Runners log into the server to prevent MD-5 from performing the glitch. While the others have failed, Belle has succeeded in killing most, including Masa. Instead of finishing Tari off as Lucks asked her to, Belle removes her speaker and begins to torture and question Tari about Lucinia. Later, Tari was able to fend her off and execute the glitch.

Lucks turns furious at Belle's missed opportunity but later chooses a backup plan. He manages to corner the group into a circular room and has his soldiers beat them down. He bargains Masa's life for the sake of Sofia to give in her phone, even going so far as to breaking Masa's meta runner arm. Sofia tearfully gives away the phone, and the soldiers delete the hacked information. Belle reveals the "truth" to Sofia about her sister. Lucks further reveals that he used Theo as a spy. As he and his soldiers were about to have the group imprisoned, Tari offers her membership in return for her friends' freedom. Lucks makes sure of this by crushing Theo's cartridge, holding the boy's conscience hostage.

It is later revealed that Lucks has been keeping Lucinia's body alive and experimenting on her in a secret lab.

6 months after the happenings of Shutdown, Tari works for Lucks and competes in Tournaments with Belle and the new addition Evelyn Claythorne. Lucks also has Theo on the TAS Corp. server and works on a way to get Theo back into his game without glitches.

However, MD-5 has returned to action, with Belle now assisting them due to finding out the truth about Lucinia's disappearance, and the show match is now in chaos due to Sofia's tampering. By taking the role of an announcer, Sofia makes sure that all eyes are on Lucks, with the latter now aware of MD-5's presence.

After Tari wins the Showmatch, Lucks attempts to do a security check around the arena, but is tackled by Masa, who gives him a black eye. Mercenaries find Belle in the lab offscreen, and Lucks brings both Meta Runners into a van.

Lucks is furious that Tari, Lamar, and Sofia got away, and has to hold Masa, Belle and Theo hostage to save his company from public exposure. His first name is revealed to be Derek during a flashback in META RUNNER Season 2 - EP 8: Soft Lock.

In META RUNNER Season 2 - EP 10: Fatal Error, he threatens MD-5 that he was going to kill Masa. However, he got exposed in front of the entire people of Silica City by the media, and was issued an arrest warrant by the Chief of Police. Before he was sentenced to jail, he informs MD-5 that Lucinia still lives, with her fragments that are currently within Tari. He was shot and killed in the face by a forced Masa Shimamoto after Dr. Sheridan hijacked his Meta Runner arm, stating that he was behind it all along, saying "well played" before being killed.

Lucks was a Caucasian male with blue eyes, slicked-back blonde hair, blonde eyebrows and a light beard stubble. His usual outfit was a blue business suit with a white undershirt and black tie. In season 2 his suit had more of a teal color. 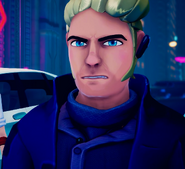 Lucks in the official trailer. 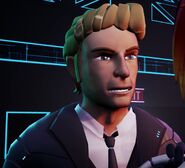 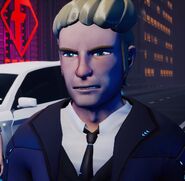 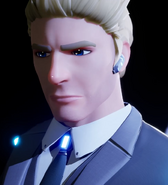 Lucks in the 2nd season 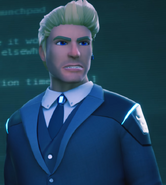 Lucks in Firewall
Add a photo to this gallery

On the surface, Lucks appeared to be a man very much in control of his emotions. No matter the situation, he always spoke with an even keel whether it's giving orders or threatening a subordinate. Just beneath that, however, he possessed some strong anger issues and had no problem with making others suffer for his goals. Right before his fate, however, he chuckles as he manages to sarcastically congratulate "him" for his victory rather than being afraid.

Lucks proved himself to be an opportunist as he saw almost anything as an opportunity in some kind of way and seeked to take advantage of it. This led to moments of obsession, such as his desire to make Tari "his". He never cared who he hurt or what gets destroyed along the way as long as it suited his goals. He did have some measure of self-restraint, taking precautions not to raise attention when possible.

It can be seen, however, that he would go to extreme lengths when necessary to achieve his goals, such as when he shot Masa's Meta Runner arm off or entrapped Theo in a comatose-like state after destroying his game cartridge, as 'collateral' to keep Tari loyal to TAS Corp and dissuade MD-5 from giving TAS Corp any more trouble. Later, when his leverage against MD-5 is endangered when Tari warps into Theo's game to rescue him, Lucks took advantage of Evelyn's hatred for the former and gave her connection to the game to stop Tari.

Retrieved from "https://supermarioglitchy4.fandom.com/wiki/Derek_Lucks?oldid=386339"
Community content is available under CC-BY-SA unless otherwise noted.