SuperMarioGlitchy4 Wiki
Register
Don't have an account?
Sign In
Advertisement
in: A to Z, Characters, Minor Characters,
and 3 more

To give people mail

Derpy the Mailman is a minor character in the SMG4 series.

He is a mailman that delivers mail to the Mushroom Kingdom. It's possible that he is based off of Derpy Hooves from My Little Pony: Friendship Is Magic.

Derpy the mailman's color code is gray all over, except on the hair which is blond. This look is then similar to Derpy Hooves's.

He also has derpy eyes, hence his name.

Derpy is seen in the 8th skit of the blooper, saying "DERP" in the corridor which leads to the courtyard in Princess Peach's Castle.

SM64: The Adventures Of Mario And Luigi Ep 1

Derpy shoots an envelope at Mario, who is hit with the mail. Mario then reads it only to be hit by another envelope that Derpy also shot.

Derpy is seen running away from a giant Bowser. 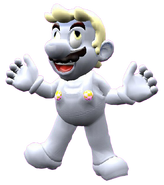