SuperMarioGlitchy4 Wiki
Register
Don't have an account?
Sign In
Advertisement
in: Meta Runner, A to Z, Characters,
and 11 more

The Master (Doctor Who)

He was a former scientist for TAS Corp. and the mind behind Project Blue, a mysterious project he developed a unique A.I. to assist Meta Runners in gameplay, to avoid being fired by Derek Lucks.

His dream was to use the project to make himself known in the gaming industry by creating an advanced A.I. program called T.A.R.I., that could help meta runners optimally beat any game, but an accident ended the project prematurely that seriously injured him and Lucinia Porter in the process.

However, he and Lucinia are confirmed to have survived, as he returns in Season 2. First appearing secretly as the "annoying neighbour" in Firewall, again bumping into Masa placing the chip onto his arm in Soft Lock, and he is properly revealed in META RUNNER Season 2 - EP 10: Fatal Error, offering Tari's game-warping abilities to the now jobless Evelyn.

Dr. Sheridan is a male adult. He has dark skin with brown eyes and dark brown hair with a slight beard. His normal outfit is a grey and blue coat with a tan vest and white undershirt. During Season 2, Sheridan took on the disguise as one of Masa's neighbours who wore a robot mask that concealed his identity. After the events of Season 2, Sheridan had been revealed to have severe burns across the left side of his face. 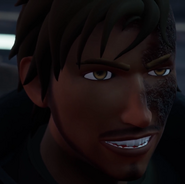 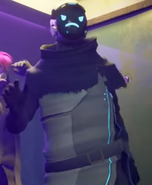 Dr Sheridan as the "Annoying Neighbour" in Firewall

When interacting with Tari, Sheridan is something of a father figure. He gently encourages Tari and pushes her to do her best when training her at games.

As he continues teasing and completing Project Blue, Sheridan shows signs of mental instability. He is seen laughing madly and growing more disturbed as time goes on.

This insanity has presumably now led to straight-up villainy, as in META RUNNER Season 2 - EP 10: Fatal Error, it is heavily implied that he is the one who set up Masa to shoot Lucks dead, and he wishes to take "revenge" on Tari.

A scientist in the employ of TAS Corp., Dr. Sheridan soon found himself under the threat of being fired. To avoid this fate, he began work on his life's goal, Project Blue, which he hoped to both revolutionize the industry and keep his job.

His progress was going good as the AI he built was optimally beating each game thrown at it. After a while of searching for a human host to implant the AI into, he eventually acquired the help of Lucinia to further his plans.

After a while of testing, he believed that it was time to take the experiment to the next level by downloading a more advanced version of the AI into Lucinia's arm. At some point during this process the computer surged and caused an explosion that severely injured both of them.

He appears as Masa Shimamoto's neighbor in Firewall and he later bumps into Masa in Soft Lock as the stadium is being evacuated, planting a chip in Masa's Meta Runner arm, which he used to manipulate Masa into killing Lucks.

In the stinger for that episode, he calls Evelyn Claythorne, offering help for her to take revenge on Tari.