SuperMarioGlitchy4 Wiki
Register
Don't have an account?
Sign In
Advertisement
in: Needs cleanup, A to Z, Characters,
and 14 more

He is an overweight and obese Shy Guy originating from Paper Mario who loves to eat. He is usually seen sitting on Mario acting as a barricade, or a weapon. In the video "SM64: ṩṩἔᾗмὄḋᾗᾄʀ 6.64(100k special Qna Edition)", he became enraged after being insulted by a Koopa Troopa calling him a "gutless fatso", which resulted in him hitting the Koopa Troopa making him go flying through a wall. Due to SMG4's decrease in using two-dimensional sprites, Gourmet Guy's appearances have been red uced to cameos and has hardly appeared in any modern bloopers.

Gourmet Guy was one of the participants in Mario’s challenge in The Mario Channel: MARIO'S CHALLENGE

As of SMG4: The Pursuit of Happiness, a 3D model is used for Gourmet Guy rather than a 2D sprite. The 3D model might be made by the people at Glitch Productions. However, he uses his 2D sprite in SMG4 Movie: 10 Year Anniversary Special likely for nostalgia purposes. He starts using his 2D sprite consistently again as of SMG4: Stupid Mario Golf.

In SMG4: WHAT IF...?, there is a universe where Bob replaces Colonel Sanders and created "BFC". It's revealed that Gourmet Guy died from a full body deep-fry meal. 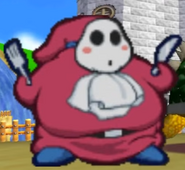 Gourmet Guy sitting on Mario after he was chasing Bowser 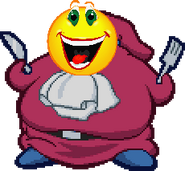 Gourmet Guy's Gmod model in SMG4: The Pursuit of Happiness