Janaury 13, 2018
Guards N' Retards, often called GNR for short, and sometimes in a full form Guards and Retards, is a series of videos created by Luke Lerdwichagul in the year 2014 which is based on the video game GoldenEye 007 for the Nintendo 64. It follows the lives of Chris and Swagmaster69696969696, two guards who work at Fresh Spaghetti Tubbie and get into crazy adventures and stuff. The series is much less popular and less famous than his Super Mario 64 Bloopers and Sonic the Derphog, although it has been around for quite some time. It was eventually merged with the main SMG4 series starting with SMG4: Mario's Prison Escape.

The Guards N' Retards series started in February 2014 and currently has eight episodes.

The series currently has one short.

An early title card for the series. 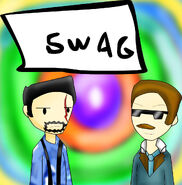 A fanart of the two main characters, Chris and Swag.
Community content is available under CC-BY-SA unless otherwise noted.
Advertisement