SuperMarioGlitchy4 Wiki
Register
Don't have an account?
Sign In
Advertisement
in: A to Z, Characters, Article stubs,
and 10 more

"You like popsicles? I got a whole freezer full of popsicles"

"Okidoki, get ready to move your PINGAS!"

Hobo Mario is a minor character in the SMG4 series.

He is an ugly and distorted Mario clone that appeared in Casino, Cards and Chaos. When Mario was using a slots machine and got three Mario heads, this clone emerged from the machine as a prize. Hobo Mario was apparently looking for Princess Daisy. Later, Mario used him to distract King Bob-omb.

He makes a small appearance in R64: A Theatre Mario. Where Mario used him as a decoy in his place at the movie theatre but was blown up after Peach realized he wasn't the real Mario.

He makes a cameo appearance in SM64: THE BOOTLEG DIMENSION, where he appears as Mario's "bootleg" form when Grand Dad used his bootleg powers on Mario.

He makes a full appearance in SMG4: The Grand Mario Hotel, as one of the many Marios in the hotel, also the first time his name was given.

In SMG4: High School Mario, Hobo Mario along with other characters were used for decoys so Mario and friends can skip History class. 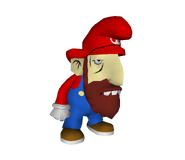 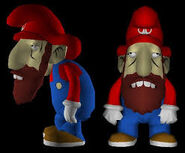