SuperMarioGlitchy4 Wiki
Register
Don't have an account?
Sign In
Advertisement
in: A to Z, Characters, Heroes,
and 11 more

Super Mario 64 Bloopers: The Mystery of the Chest

Unknown, may be somewhat an infant

A pink gumball
Hero of Popstar (canonically)
Postman (as of SMG4: Studying for Exams...But you're friends with Mario)

Kirby is a minor character in the SMG4 series. He is the protagonist of the Kirby series owned by Nintendo and HAL Laboratory.

Kirby isn’t as child-like as his Nintendo counterpart, as he warns Mario not to provoke Bonkers when they attempt to sneak into Dedede’s Castle. He also ponders who could have possibly stolen everyone's food after realizing that King Dedede was innocent the entire time.

Super Mario 64 Bloopers: The Mystery of the Chest

Kirby, along with X, Peach, Bowser, Luigi, SMG4, Toad, and Lakitu, were rounded up by Mario to find out who stole his mushrooms. In X's flashback, he puts a bomb in a room where Kirby is sleeping, with the bomb shortly detonating afterwards and Kirby getting knocked unconscious. Towards the end of the video, Kirby finally wakes up and asks if everybody got a good night's sleep, much to everyone's dismay.

SM64 Bloopers: Shoot to the Observatory in the Sky

Kirby is seen happily dancing on his Warp Star until he crashes into Bowser's Clown Car, which, in turn, causes them to crash into Rosalina's observatory and the Clown Car to destroy the beacon. Even though the Koopa King and puffball end up fighting about it, they are rounded up into listening into Rosalina's storytime, much to the gumball's disappointment with a beer bottle. Later on, when the observatory was being pulled towards a black hole, Mario told Kirby to hold the wormhole generator. However, due to him thinking it was a lollipop, he ended up eating it and lasering everybody to Earth. The ending features him asleep and Bowser reading a story to him and the Lumas.

The pink blob is seen happily consuming Fox McCloud's sandwich. The Arwing pilot furiously shoots down the gumball's vehicle, causing him to crash to Earth and being found by SMG4 and Mario. Mario decides to rebuild Kirby's Warp Star (and creating a blatantly different product), while SMG4 tries to bring food for Kirby. Unfortunately, Kirby causes ruckus by first trying to eat SMG4's head, and then inhaling a Toad. To make matters worse, Toadsworth ruthlessly tries to get rid of the puffball with his giant boot, resulting in a wild-goose chase around the castle (in the process, Kirby consumes an entire kitchen - literally). Although the two get cornered, they're saved thanks to Kirby's poop ascending them into the sky. However, Toadsworth has rocket power with his boot too - only to get shot down by Fox McCloud, who still wants to avenge his sandwich. Mario’s frustration results him kicking a battery at the duo, causing them to crash. Kirby then activates his Super Sucky Mode, copying Mario in the process and barfing spaghetti in the process. Thanks to Fox crashing his Arwing into Peach's Castle, the intergalactic space phones drops down and Kirby is finally able to call his "mother" into picking him up via UFO. As a means of saying goodbye, Kirby inhales SMG4's head once again.

SMG4: If Mario Was In... Kirby Star Allies

Kirby brings Mario to Planet Popstar via UFO, with the purpose of trying to restore all of Dream Land’s food back from King Dedede. After they easily defeat various enemies, they arrive at Castle Dedede, defeat the King’s minions, and confront the penguin. Dedede explains that he was protecting rather than stealing it. His reasoning was interrupted by the Halberd vacuuming Mario and the food, encouraging Dedede and Kirby to get Wing abilities to take off to the Halberd. After locating Mario and the food (and getting disgusted in the process) on the ship, they realize it wasn’t Meta Knight, either: rather, it was SMG3 out of evil intentions...and that he’s poor. Mario sympathizes with SMG3, only to kick him off the ship. The three then have a picnic with Dream Land’s food.

Kirby is one of the challenges Mario and SMG4 take, this one being to avoid being eaten by him. Mario seemingly succeeds when Kirby inhales a boulder, only to be crushed between two boulders and then swallowed. SMG4 escapes the vacuum but has his skin ripped off. 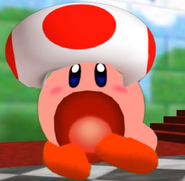 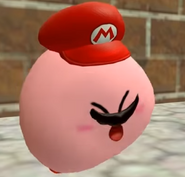 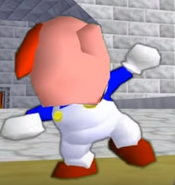 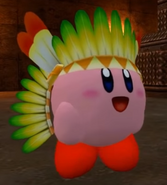 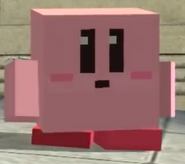