SuperMarioGlitchy4 Wiki
Register
Don't have an account?
Sign In
Advertisement
in: A to Z, Characters, Minor Characters,
and 8 more

KizeeWizee22 (also known as Kw977) is a minor youtuber in the SMG4 series.

He appears as a recolored Mario with a red cap, orange overalls, and a red sweater. 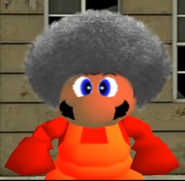 KizeeWizee22 as a disgruntled fan in SM64 bloopers: The Idea block.