"Yo, you seen my good pants? I got a date tonight with Sakura-chan."

Lamar Roland Williams is a major character in Meta Runner and the first member of MD-5 that Tari meets.

Lamar is an African-American man who has an average build, and is slightly taller than Tari. He has lightish brown hair, sharp eyebrows, green eyes, a faint small mustache, and a goatee.

Lamar wears a black beanie with 2 yellow stripes and red triangle. which is likely its brand's logo, a black and yellow tank top with a hood, grey pants, a black belt with a silver buckle and some logos on it and black shoes. In season 2 not much has changed except extra detail on his jacket and the hair darken.

His Meta Runner arm is on his left, while his right is organic, with yellow and green wristbands.

Lamar in the official trailer. 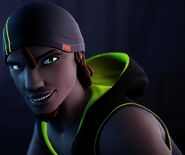 Lamar in the 2nd season
Add a photo to this gallery

Lamar is an otaku. A running gag is that he has a new body pillow in almost every episode he's featured in, each based on a character from Nova Explorers. This makes him seem like somewhat of a comedy relief, but he is intelligent and hates risks, shown from his disdain of Operation: Silent Demon.

He is laid-back and doesn't seem to mind the life he has chilled out in the MD-5 base.

Retrieved from "https://supermarioglitchy4.fandom.com/wiki/Lamar_Williams?oldid=370876"
Community content is available under CC-BY-SA unless otherwise noted.