SuperMarioGlitchy4 Wiki
Register
Don't have an account?
Sign In
Advertisement
in: Article stubs, A to Z, Characters,
and 3 more

Lilyncookies, or more commonly Lily, is a minor YouTuber in the SMG4 series who only appeared in the episode Super Mario 64 Bloopers: ṩṩἔᾗмὄḋᾗᾄʀ (1,000 Subs).

She is a Deviantart user who has appeared only once in the mentioned SMG4 video and is a character from the channel MarioMario54321. 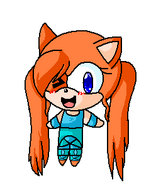