SuperMarioGlitchy4 Wiki
Register
Don't have an account?
Sign In
Advertisement
in: Meta Runner, A to Z, Characters,
and 7 more

And besides, you're one of the most talented speedrunners I know... Hell, you're a lot better than me, that's for sure!
DOCTOR! WHAT'S HAPPENING!?
Slow down, slow down. There's no speedrun for conversation.

Lucinia Porter is the posthumous overarching protagonist of the 2019 Glitch Productions science fiction-animated webseries Meta Runner. She is the sister of Sofia Porter.

She first appeared in the episode Wrong Warp. In Game Plan, it was revealed that she was caught in an accident during Project Blue and was recovered by Lucks, who covered up the truth about her disappearance and led everyone to believe she had gone missing.

In Fatal Error, it was revealed by Lucks that she survived the explosion in Dr. Sheridan's laboratory. The experimental A.I. uploaded into her caused her mind to fragment, with parts of it being lost in the TASCorp server and the other part going into Tari, who is revealed to be the A.I. program that fused with parts of Lucinia's mind to create her current self while her body is currently in a coma.

Lucinia is a young woman with bright long fuchsia hair, pale fair skin, and a slender build. She was shown to wear a black tank top and dark-blue shorts with a navy hoodie tied around her waist, as well as black tube-socks and thigh-high black leather boots. Being a Meta Runner, she had a mechanical left arm she used in gaming competitions, which seems to resemble Tari's model.

Lucinia in the episode Wrong Warp.

Lucinia in the first theme song

Lucinia in the episode Shutdown. 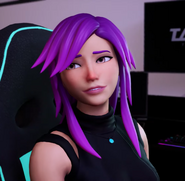 Lucinia in the 2nd season

Lucinia in the episode Fatal Error.

Not much was known about her. She seemed rather shy and unassuming, and was shown to have a very strong friendship with Belle Fontiere.

In a flashback shown in Soft Lock, she is shown to lack self-esteem in herself and calling herself an "old dog" teaching new tricks to Belle by showing her a new glitch as she believes Belle can obtain the world record in Ultra Jump Mania when she can't and sees herself as incompetent compared to Masa and Belle, especially since she hadn't had a press conference in months unlike the two of them who have theirs frequently.

Even as a memory fragment, she seems to retain her personality. However, it seems that part of her personality had merged with Tari, thus allowing Tari to act human.

Lucinia was one of TAS Corp.'s notable Meta Runners. She was so notable she appeared in company ads. She became acquainted with Belle Fontiere and the two became close as a result, with Belle seeing her as her best friend. She was the older sister of Sofia Porter, as revealed in Shutdown.

However, as time went on, she became less relevant compared to the likes of Masa and Belle as she hadn't had a press conference in months unlike them and other runners, which led to her going around the science labs of TASCorp looking for ways to improve her lacking skills, despite Masa's assurance she deserved to be on the main lineup as he saw her as one of the best Meta Runners he knew of.

Eventually, she became affiliated with Dr. Sheridan and Project Blue. She aided him in his research until the fateful accident that destroyed his lab, resulting in her conscience being split into server and Tari, and her losing her meta runner arm. Later, her body was found by Lucks and his team and he ordered a medical team to treat her and kept the incident a secret from his Meta Runners. They were able to save her body, but she couldn't wake up because her consciousness was missing.

She didn't physically (or virtually, at the very least) reappear until One Shot, where Tari mysteriously passes out as soon as she warps into Tempest, which was being run on TAS-Corp's server. Tari ends up having a strange vision of a mysterious purple haired girl facing the opposite direction of Tari. As Tari tried to call out to her and reached for her, the girl suddenly dropped away as Tari started to wake up. While Masa and Belle argue, Masa mentioned Lucinia, causing Tari to suddenly remember the strange purple haired girl in her vision and realized that she might be Lucinia.

When Tari managed to escape Belle and crash the game, she subsequently receives another vision of Lucinia. This time, Lucinia turned around to face Tari, but as soon as she does so, her appearance suddenly changes to reveal that she had suffered an explosion, and her Meta Runner arm was blown off as a result.

Six months later, Belle tasked Theo to look for anything to do with Project Blue to find evidence of Lucinia's fate. Theo couldn't find anything at first, but then suddenly, a strange purple glitter flew over to Theo and gave him the file he was looking for. When Belle viewed the file later, it revealed to her that Lucks had always known about Lucinia's fate, causing Belle to turn against him.

The purple glitter would return to boost Tari's precision in Hidden Heroes to defeat Evelyn and helped Theo learn a wall clip during his escape from the corrupted Ultra Jump Mania. After Tari manages to free Theo from his game for good, the glitter appears once again, finally revealing itself to be Lucinia, although she initially couldn't remember her own name until Tari said it to her, but she manages to correctly guess who Tari was. When Tari asked Lucinia who Tari was, Lucinia told her everything she knew offscreen.

Tari later reveals what Lucinia told her later on: when Lucinia's consciousness was blown apart, parts of it went into the server, and other parts went into Tari, who at the time was actually Sheridan's A.I. program.