For other subjects on the wiki with SMG4 as its name, please see SMG4 (disambiguation).

YouTuber, Director, Animator, Voice Actor
Luke Lerdwichagul (born May 24, 1999), also known as SMG4, is an Australian YouTuber, director, animator, producer, and voice actor. He is the founder of the SMG4 channel, the co-founder and chief content officer of the animation studio Glitch Productions and the co-creator of the web series Meta Runner and Sunset Paradise. He is represented in videos as the aforementioned SMG4, a blue-and-white Mario recolor and one of the two main protagonists of the bloopers, while Luke himself serves as one of the overarching protagonists. He is the younger brother of Kevin Lerdwichagul.

He has been the series director of the SMG4 series since its first episode on May 7, 2011. He was the inaugural chief writer of the series until June 22, 2016, when his brother replaces him, and inaugural chief video editor until July 13, 2019 when he was succeeded by James Bailey and Paul (MediExcalibur2012). He would later go on to be the chief editor of the Mario Does Things series.

As the creator of the series Luke has provides the voices for many characters in the SMG4 series, additional voices for Meta Runner, and Mash for Sunset Paradise.

At the end of the blooper Super Mario 64 Bloopers: ÐД gℓî†¢ђ, after the Virus is destroyed, Toad is warped to SMG4's room in the real world. His identity as of then, was, unclear – SMG4 teased the community about this with the Facebook message "It probably could be me"; although it was finally revealed to be him in SMG4 VS ALS Ice Bucket Challenge.

In SMG4's deleted prank video, he was ostensibly revealed to have the first name Ryan; however, in SM64: Mario In Real Life!? (200 Vid Special), he is referred to as Luke, confirming that his real name is really Luke Lerdwichagul, as pathboyjosh found earlier. There's a screenshot from this deleted episode if you scroll down.

In SM64: Mario In Real Life!? (200 Vid Special), the real-life SMG4 made his first main role in his blooper series. The special involves Mario and several other major characters getting warped to his house, making it necessary for him to get them back to their world before anyone finds out.

In SM64: ṩṩἔᾗмὄḋᾗᾄʀ 10 (350k apocalypse special), he enters his computer room, only to discover a clone of himself is sitting in his computer chair and licking his Waluigi plush doll.

In SMG4 Plays Merio Nernterndos 2, just as he was playing Wario Dates, Luke freaks out upon seeing text showing how Wario and Bowser were making out, to the point of dying on his table from shock.

In SSENMODNAR DELUXE - 1 MILLION SUB SPECIAL, the Fourth Wall is broken by Dr. Eggman when he managed to use his Dab gun to zap Luke, causing him to dab multiple times.

In SMG4: Stupid Paper Mario, because he as SMG4 managed to spend his money carelessly on a crane game he kept failing at, the SMG4 world deteriorated until it became real life with him at the end using a fake computer. Fortunately, Mario (as a plush) managed to give him real money, causing the world to be returned back to normal.

In SMG4: The Other Universe, Luke is seen uploading the USB key to a Project 64 emulator which started the series.

In recent videos, he has been advertising several company sponsors/his limited merchandises on his shop to the viewers before the start of each video alongside his brother Kevin.

In SMG4 Movie: REVELATIONS he appears to be much larger than the main characters than before, he walks up to the God Box (which looks like a regular box to him) and asks Kevin Lerdwichagul why its glowing, he thought it doesnt matter and goes to another room.

Evidence of his identity prior to the A.L.S Video

A screenshot from the now-deleted prank video. The person on the computer is the real SMG4 aka Luke. 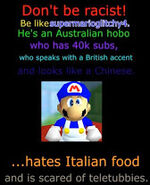 The picture from the SUPAH SMG4 PACK. The dark indigo text above the icon reads, "and looks like a Chinese" 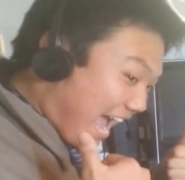 A photo of Luke 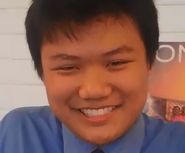 Another Photo of Luke

SMG4/Luke Freaking out because he's a Toad.

Luke holding a pillow with Rosalina on it. 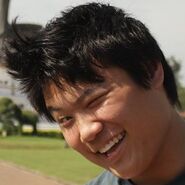 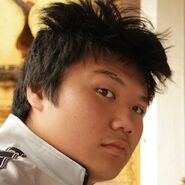 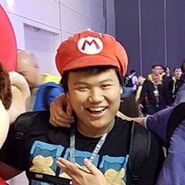 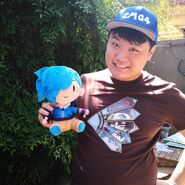 Luke/SMG4 as seen on Dumb Stories to Relax and Chill

Luke/SMG4 as seen on SMG4 in Real Life

Luke as seen on the Glitch Productions channel trailer.

Luke in 2020 showcasing his merch. 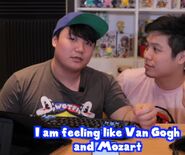 Luke in SMG4 DRAWING BATTLE! ("Mozart was a musician." - Kevin)