SuperMarioGlitchy4 Wiki
Register
Don't have an account?
Sign In
Advertisement
in: A to Z, Characters, Article stubs,
and 18 more

SM64 bloopers: The Idea block.
SMG4: If Mario Was In... Nickelodeon (picture)

MarioStar92, formerly MarioStar64, is a minor YouTuber in the SMG4 series. He appears in his old color code.

MarioStar92 appears just as one of the members of the YouTube Rangers but didn't have any actual roles. In the blooper "тнє ριик ρяσвℓєм", one of his most prominent appearances, he appears as the person who bought the last gloves of the shop.

He is the main antagonist of this episode, where SMG4 tries to take gloves from him. Starman3 manage to knock him out at the end of the pursuit and take the new gloves.

MarioStar92 is seen trying to escape the giant city-destroying Weegee and is telling everyone to run, only to see a Weegeefied SuperMarioGlitchy4 and scream. He also makes cameo appearances in the Ssenmodnar series.

MarioStar92 can be seen around the 3rd top image that's below the "Around the wiki" section. 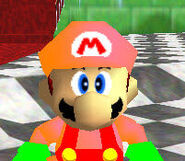 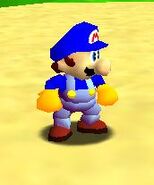