SuperMarioGlitchy4 Wiki
Register
Don't have an account?
Sign In
Advertisement
in: Meta Runner, A to Z, Characters,
and 8 more

Exposing their base
His friends in danger
Derek Lucks

Turned over to the authorities after the forced murder of Derek Lucks, whereabouts unknown (Presumably falsely convicted of second-degree murder after Dr. Sheridan hacked his arm with a Meta Bug).

That ability to go inside games, that lets you see things others CAN'T, right?
You... you have a LOT to learn... but we DEFINITELY have a place here for you!

Masa Shimamoto is a former team captain of the TAS Corp, the leader of MD-5 and the tritagonist of Meta Runner.

Masa is shown to be taller than both Tari and Sofia and is around Lamar's height.

He has dark, shaggy hair, thick eyebrows, brown eyes and some facial hair.

He sports a black and white jacket with 2 pockets and some type of insignia featuring a Samurai and Katanas, a reddish brown undershirt, black pants and boots. His Meta Runner arm is on his left and goes up to his shoulder. After the season one finale, Masa now sports a scar across the bridge of his nose and has lost his Meta Runner arm up to his elbow. He also wears a black hooded coat over his season one attire. Following the events of Heart to Heart, Masa wears a new cybernetic arm won from Marco and has opted to remove his black coat.

Masa in the official trailer. 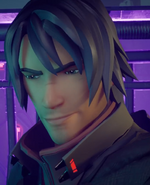 Masa in the 2nd season

Masa was a team captain of the Meta Runners in TAS Corp. during the past. He might've had a close relationship with Belle Fontiere. Upon the disappearance of Lucinia Porter, he begun suspecting that Lucks killed her. He hacked into the files, only to get caught and decommissioned. He set up a secret team called MD-5.

At unknown points of time, he recruited a computer geek named Sofia Porter (Lucinia's sister), and an anime fanboy named Lamar Williams, all of which have their own personal issues with TAS Corp.. Throughout the year, MD-5 have been trying to gain evidence of Lucks' evil affairs but to no avail.

One year later, Lamar brought Tari and Theo to the hideout. While he and the hyperactive Sofia were eager to have new members, Masa acts stubborn and skeptical, wanting to test Tari's ability through a game of Battle Blaze. Throughout these rounds, he has been giving her advice.

The next day, the group discusses Operation: Silent Demon, a plan to hack into TAS Corp. servers with the help of a glitch in an upcoming competition. The game that will be played is called Tempest, so they decide train Tari. Considering Theo's glitch problems, they also plan to regain his cartridge.

The very day, the gang reach towards the top of the mountain in-game, only for Belle to intercept. She reveals about Masa's past and beats him out of the game. Tari manages to evade Belle and execute the glitch.

When trying to escape, they are cornered by Lucks and his mercenaries. Lucks makes a deal with Sofia: hand in her laptop or Masa dies. When trying to fight the businessman off, he had his Meta Runner arm shot off. Sofia hands in her laptop in tears, and bursts out even more through the possibility of her presumably late sister. When the group was about to be incarcerated, Tari gives herself in to TAS Corp. in exchange for her friends' freedom. Lucks makes sure of this by holding Theo hostage.

The remaining members of MD-5 are escorted back to their hideout defeated. 6 months later, he remained as a Meta Runner armless man. However, thanks to the encouragement from the MD-5, they are able to convince Masa that there is still hope and manage to get a new meta runner arm.

In the endgame, MD-5 has successfully exposed Lucks to the entire people of Silica City. During their attempt to escape from the police, his arm was mysteriously hacked courtesy of Dr. Sheridan and shot Lucks.

Masa is sensible, but is willing to take risks when it's beneficial towards MD-5. He also follows the stereotype of, as Lamar puts it, "Emo", meaning quiet and somewhat introverted, but quite angsty, a trait typically seen in adolescents.

In Soft Lock, it's revealed that Masa was a lot kinder and more joking before learning of Lucinia's presumed "death".

He is very skillful at video games, with Battle Blaze being his forte, beating Tari multiple times despite her being able to learn very quickly. Even after having his Meta Runner arm ripped off by Lucks, he still retains his skill at video games as he singlehandedly beat those who challenged him, although his skill is put into question when in META RUNNER Season 2 - EP 3: Unreal Engines, it is revealed that he used an E.M.P. device to short his opponent's Meta Runner's arm (arms in the case of Marco) to give himself the win.