SuperMarioGlitchy4 Wiki
Register
Don't have an account?
Sign In
Advertisement
in: Article stubs, A to Z, Characters,
and 15 more

Take that back, you fiend!
Motherf*cking guy, what the hell did you say to me?!

Mewtwo is a Legendary Pokémon from the Pokémon series. It has powerful psychic powers and was created through genetic splicing. Unfortunately, its creators failed to give it a compassionate heart. It was created specifically to be the ultimate life form (similar to Shadow the Hedgehog from the Sonic series), so it thinks about nothing but defeating its foes. Fortunately, its creators succeeded in making Mewtwo the most powerful Pokémon in the world.

Mewtwo was one of the fighters in ♫ The Ultimate Smash Bros ♫ and made a cameo in Mario Battle Royale.

A False Mewtwo was created by Francis using Axol's Inkweaver and was a supporting antagonist in the second half of the Anime Arc. 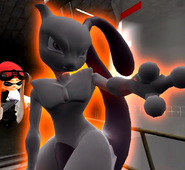