SuperMarioGlitchy4 Wiki
Register
Don't have an account?
Sign In
Advertisement
in: Murder Drones, Article stubs, A to Z,
and 4 more

This page has a wiki of its own: Murder Drones Wiki.

This article is about the series. You may be looking for the species

October 29, 2021
Murder Drones is an Australian computer-animated science fiction comedy-horror web series created by American animator Liam Vickers, produced by Glitch Productions and funded by Screen Australia for GLITCH. It is set to be the fourth animated series (third if not counting Ultra Jump Mania, which has only received a pilot) by Glitch Productions, after Meta Runner, Ultra Jump Mania and Sunset Paradise.

The series was teased on June 26th, 2021, and announced on October 8th, along with the release of a trailer. The pilot premiered on October 29th and the remaining episodes are aimed for a late 2022 release.

After humanity caused its own extinction by blowing up Copper 9's exoplanet core, causing a winter apocalypse, robots known as Worker Drones start to roam around until a group of Murder Drones start to murder them for... reasons.

Liam Vickers had previously achieved notoriety for the 2D animated series CliffSide and Internecion Cube, both of which are unfinished. When he was picked up by Glitch Productions to be a showrunner, he had no experience in 3D animation, so the company would train him. The series would be created in Unreal Engine.

On August 6th, Liam released the full version of "Disassembly Required", the song that plays in the teaser. The video description reveals the character seen in the teaser to be "V", one of the titular Murder Drones.

By the time the series was announced, it had been worked on for one year.

In February 18th, 2022, Glitch Productions announced the full series is in development now at the studio, with a glimpse of Uzi in a new, unknown location.

V during the countdown to Murder Drones.

N during the countdown to Murder Drones.

Uzi during the countdown to Murder Drones. 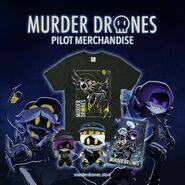