Mushrooms are arguably the most iconic items in the Mario games. In SMG4, they make frequent appearances in many of the series' videos both old and new, sometimes being used in place of real world drugs. Other times, they can cure people, such as how Mario was turned back to normal in Super Mario 64 Bloopers: 99.5% Crazy.

A mushroom with a colored cap, white spots, and eyes. They are recurring items in the Super Mario franchise. Their effects on the player's character varies from game to game. In both the Mario Kart and Mario Party series, the Mushrooms share an appearance with the Super Mushrooms from the Super Mario series.

In the Mario Kart games, a Mushroom is an item that grants the Kart a burst of speed and allows the player to drive through off-road surfaces without slowing down. Mushrooms can come in singles or triplets, the latter providing three Mushrooms to use in a row.

In SMG4 videos, some mushrooms are hallucinogenic drugs. In contrast, 1-Up Mushrooms cure these hallucinations.

These are the many Mushroom variations featured in the SMG4 series. 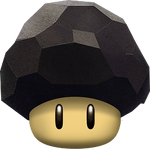