SuperMarioGlitchy4 Wiki
Register
Don't have an account?
Sign In
Advertisement
in: A to Z, Characters, Article stubs,
and 13 more

Villain
YouTuber (pretending to be)

To capture SMG4 and bring him to SMG3 (failed)

Being loyal to SMG4
Bullying Mario

His own fists
Cage

Launched from a cannon by Mario and explodes

"Master SMG3 will be very pleased!"

SuperLuigiGlitchy4 (or SLG4 for short) was said to be the long lost hobo brother of SMG4.

SMG4 meets SLG4 after buying Mario spaghetti. SLG4 was living in a dumpster with a goomba. SLG4 followed SMG4 back to the castle in the form of hiding in the back of SMG4's car. While SMG4 is hiding in the back part of the castle, SLG4 enters the castle and reveals his name. SMG4 begins to wonder if SLG4 is his brother and has Dr. Mario test their DNA. Two hours later, Dr. Mario confirms that the two are brothers, after saying that Toad is "the father," however later SLG4 tells Mario that he is not anyone's brother. After Mario discovers this SLG4 begins intentionally harming SMG4, Mario eventually runs away from the castle since SMG4 didn't believe that SLG4 was evil and finds SLG4's old dumpster. In the dumpster Mario finds a photo depicting SLG4 with SMG3 looking like they're best of friends. From this it is concluded that SLG4 is working with SMG3. Mario rushes back to the castle to show SMG4 but only finds SLG4. SLG4 attempts to stop Mario, but gets crushed by a Thwomp. SLG4 had already trapped SMG4 in a cage. In the end, Mario messes with the cannon and launches SLG4 into oblivion where he explodes.

SLG4 reappeared again as a Mario recolor that lives in Bloopersville. After Mario gave weapons as presents to all the recolored that got wronged by SMG3, he joined the crowd who pursued SMG3.

SLG4's color code is the opposite of SMG4's, except for the original white gloves and brown shoes. Unlike SMG4, SLG4 has a white cap, a white shirt, and blue overalls.  He has the standard "M" on his hat like most of the Mario Recolors.

SLG4 with his arms spread out. 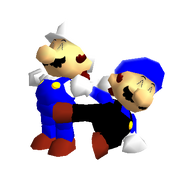 SLG4 and SMG3 hanging out. 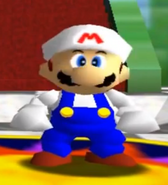