SuperMarioGlitchy4 Wiki
Register
Don't have an account?
Sign In
Advertisement
in: Religious Characters, A to Z, Characters,
and 6 more

Unknown (Around a centuries old)

Sarvente, shortly called Sarv, is a character from Friday Night Funkin' in the SMG4 series.

Sarvente was one of Mommy Mearest's minions. She and Ruv met Mario in her church, where she thought Mario would be a good sacrifice. However, after he showed his desire to fight, she told Ruv to rap battle against him. She was hit by Girlfriend's speakers when the rap battle started. When Ruv was defeated, he exploded, crashing into Sarvente while being knocked away. 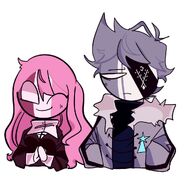