SuperMarioGlitchy4 Wiki
Register
Don't have an account?
Sign In
Advertisement
in: A to Z, Characters, Season 7 Debuts,
and 6 more

Impaled by Toad, and put out of a job after Spyro and Sony Headquarters' defeat.

Sephiroth is the main antagonist of Final Fantasy VII, and a recurring character in the SMG4 series.

He is a genetically-modified super soldier who is Cloud Strife's archenemy. In the series, he often finds himself at odds with Mario, Meggy Spletzer, and other SMG4 characters. A false anime clone of him was created by Francis in The Anime Arc.

Sephiroth first appears in this video, where he is among the many fighters that appear to defeat Masahiro Sakurai.

Sephiroth makes his first physical appearance in near the end of this episode, where he, Kratos, Crash Bandicoot and Solid Snake block the way to Spyro's office and fights Mario, Bowser, Luigi and Toad. After Crash's defeat, he attempts to kill Luigi, only to be impaled by Toad, defeating him. Later, he appears among the homeless PlayStation characters after Nintendo Headquarters is restored and Sony Headquarters goes defunct.

When Meggy Spletzer is asked how she feels about Sephiroth's inclusion in Super Smash Bros. Ultimate, she states that she wants him to be her punching bag (obviously as a proxy revenge for Desti's murder by False Sephiroth), which is accompanied by a scene of her kicking him in the face.

Melanie (Medusa) turns Mario into him

He appears in the meme on Mario's computer

Sephiroth being impaled by Toad.

Sephiroth and the rest of the PlayStation characters after their defeat by Nintendo Headquarters. 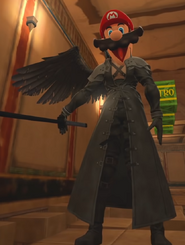 Mario being as him.