SuperMarioGlitchy4 Wiki
Register
Don't have an account?
Sign In
Advertisement
in: A to Z, Characters, Males,
and 19 more

Shrek is a recurring character in the SMG4 series.

He is a green ogre and the main protagonist of DreamWorks' Shrek film series. He first appeared in SM64: Cooking with Bowser & Mario 2!.

This is Shrek's first and most prominent appearance in SMG4's bloopers. In this video, he was created as a result of a chemical reaction that occurred after Mario added a Super Mushroom to a bowl of presumably unfinished Tubby Custard with weed. Shrek then proceeded to rape Bowser, destroy Mario's restaurant, Cafe Mario, knock a red Yoshi out of his chair, hit SMG4, and dance with a manly version of Waluigi and the girls from the original Caramelldansen video before rocketing out of the building towards the moon, all to the song Caramelldansen. Later, Mario is traumatized because he believes Tinky Winky and Shrek are connected to the Illuminati.

Shrek makes two other cameo reappearances in this other video for a few seconds, both at the "Super Mario Business Time" in an office, on his computer in the background. The first time is when the phone is ringing, and the second is when Trevor Phillips of Grand Theft Autos V accidentally shoots Mega Man Volnutt when he tries to assassinate Mario.

Shrek was shot at SMG4 in the "Survive the Shrekkening" challenge.

In this blooper, archival footage of Shrek from his debut was shown when Bowser mentioned him.

He appears in the "Triple Round".

Shrek appears in Teletubbyland and wants to destroy it, but the Teletubbies stop him in a dance competition.

Shrek appears as the Kushroom Mingdom’s counterpart to SMG4, but he does nothing beyond crushing Luigi and SMG3 (and capturing the former).

He is seen getting attacked by CD-I Link.

He appears in Bob's class.

He appears as a trap in The Pain Train.

SMG4: Lost In The Woods

Shrek appears as a minor antagonist in this episode. Mario, Luigi, and SMG4 founded his house where Bob appears claiming that it's his. Then, Shrek bursts out from the door and Bob thought he died. After the gang makes their escape (with Bob pinned to the wall), he doesn't appear until the very end of the episode when he can be seen working at McDonald's while Bob can be seen in the pot.

Shrek appears at the beginning as the vendor Mario buys hot dogs from. After Saiko burns the beach, he is replaced by Po as the hot dog vendor.

SMG4: Mario And The T-Pose Virus

He is one of the T-Pose Zombies that invades the castle.

SMG4: Mario and the Waluigi Apocalypse

Shrek appears in some news footage of the T-Pose zombie apocalypse that Waluigi was causing, where he was briefly seen when Waluigi used his staff to turn the ogre into a T-Pose Zombie.

He appears as a toy.

SMG4: Mario and the Bob Mansion...

He was only used as an avatar in Bob's retelling of Bobsgiving.

He appears as a maid cafe worker.

He appears as one of Bob's fans.

SMG4: Mario Gets Stuck On An Island

He appears in a flashback as one of the doomed passengers to die in a plane crash when Mario threw the pilot out of the cockpit.

He appears in the maid cafe with Carl Wheezer, twerking to Bob.

He appears in a item block.

SMG4: There's Something Up With Meggy...

He is one of the many thing Meggy offers to trade for Tari's duck.

SMG4: Treasure Hunt With The Bois

He gets fished out by Mario who was doing so for food. Naturally, Mario throws him back in gently.

Later on, Mario fishes him up again to let him deal with the Teletubbies.

He briefly appears from the sewers to spook Luigi.

He tries to chase Mario's Taxi.

SMG4: The Demon Among Us

He appears in a flashback, in which Saiko Bichitaru beats him up.

He appears as a farmer.

He and his friends take down Dr. Eggman.

He is one of the new fighters Master Hand hires.

SMG4: The Quest for RTX

He appears as the giant.

He appears as one of the memes in SMG4's mind.

SMG4: The Day HE Arrived.

He appears as countless clones created by E. Gadd while being forced to do so by SMG0. They are used by SMG0 to take Mario and lure SMG4 to his Guardian Pod.

He is one of the many memes SMG4 and SMG3 uses to make a bridge.

While he doesn't appear in the main episode, he can be seen in the thumbnail of the SM64: Cooking with Bowser & Mario 2! before the actual skit starts.

He appears in the Human Resources Club.

SMG4: If Mario Was Spiderman

Ha appears in the Radioactive Club.

He appears in the lunchroom. 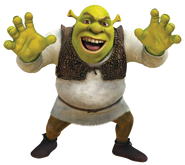 This is the part where you run away! 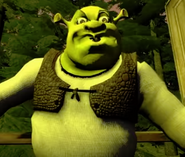 Shrek, you're being an ASS!

Shrek in SMG4: The Quest for RTX

Shrek appearing as uncountable clones in SMG4: The Day HE Arrived.