SuperMarioGlitchy4 Wiki
Register
Don't have an account?
Sign In
Advertisement
in: Article stubs, A to Z, Characters,
and 7 more

Shy Gals are female Shy Guys. They have made minor appearances in SMG4's videos. They first appeared in SM64: ṩṩἔᾗмὄḋᾗᾄʀ 9 - Time travel edition when a Shy Guy eats a Mushroom and starts to hallucinate about Shy Gal. They are overly sexualized females, so shy guys like Toast guy and Gourmet guy find them attractive and start fighting over who can date them. 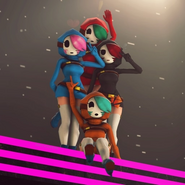