Sonic the Derphog: The Item Brick

Sonic finds an Item Block from the Mario universe in his own world, and then uses it to help himself in his adventure.

Sonic is running along in Green Hill Zone when he jumps a cliff and bumps into an Item Block. As he falls, Tails yells out to him to, "Notice me, Senpai!".

Sonic jumps back up and notices the block properly, which glitches for a bit. He can't reach it however due to how high it is. Omochao appears behind him and orders him to save the world, causing Sonic to throw him at the block to get him to shut up. It produces a ring, which glitches into a coin in Mario's world for a second, which gives Sonic an idea. He finds Amy bouncing on a spring and steals the spring (and saying Pingas). He uses the spring  to get himself tons of rings from the block.

Soon afterwards, Eggman is running through Green Hill Zone singing "Gangnam Style", and launches himself at a loop's wall and into the ground nearby. He becomes sad due to how lonely he is, until Sonic finds him, where he gets mad. He yells at Metal Sonic nearby to attack, but Metal Sonic halts by saying "Uh uh uh, you didn't say the magic word." Eggman rewords his sentence. "Give me that hedgehog's pingas!" Metal Sonic instantly goes after Sonic after this. Sonic isn't phased when Metal Sonic attacks him however, when Eggman mentions he should drop at least two dozen rings, when Sonic reveals he has far more than two dozen rings and launches them all at Eggman.

Sonic begins to like the "magic block" because he can become invincible forever, and pops out another ring. However, the ring through dimensional contact begins to flash a vision of Mario throwing the block into a portal by Professor E. Gadd and then turns the ring into a crazy Tails, which shocks Sonic. Not only is that ring transformed, but every single one of the rings in the ring trap Eggman was in change into millions of dancing crazy Tails and begin to devour Eggman. Sonic screams at him to "SHUT UP TAILS!"

Sonic then begins to question this block, thinking it to be from another universe and speculating that it's glitching everything up. He then hits it again and a mushroom comes out, which he eats and it causes him to grow larger. Amy walks around the corner wondering what Sonic is up to, and she sees him massively large while Sonic becomes afraid that she is there. She, upon seeing his gigantic proportions, screams and decides to run off the side, and kills herself. Sonic becomes worried and a Motobug comes along and hits him, shrinking him down to size.

He hits the block again and a poison mushroom comes out. Knuckles comes along and wonders what is going on. Sonic tries to cover up the block fiasco by telling Knuckles nothing is happening. He crawls towards the mushroom when Knuckles notices him doing this and almost shoots the mushroom. The mushroom however jumps into him and Knuckles begins seeing hallucinations and screams praise to "Sonic Adventure 2". He walks away dancing from Sonic while shouting excitedly. Baffled by this act of stupidity, Sonic gives up, stating that Knuckles is weird.

From a nearby cliff, Eggman spies on Knuckles and Sonic, noticing Sonic's block and realizing that that's been causing the rings turning into Tails' among the other effects. He begins to plan to steal it, but Sonic hears him because of the volume of his voice. Unfazed, Eggman dumps a battleship onto the place and begins asking Sonic for the block. Sonic refuses to give it up and after being taunted by Eggman and Metal Sonic doing the can-can, Sonic hits the block and causes a Fire Flower to come out. He grabs it and launches a few fireballs at Eggman, igniting him. He screams to Metal Sonic to destroy him but Metal Sonic once again asks for "the magic word" to which Eggman says "PINGAS" and Metal Sonic launches himself at his doppelganger. He claws at Sonic, launching him at the wall. Metal Sonic electrifies the block and generates a rocket launcher for him. Sonic hits it and gets the Waluigi Launcher, shocked at what it even is, but launches the panicking Waluigi at him anyway. The two attacks collide, and launches Metal Sonic off the cliff. Sonic is hurt, but he gets up, the area around him burnt to black with some flames still up.

Meanwhile in the midst of this, Eggman was merely using Metal Sonic as a distraction as he happily runs off with the block floating above him, with Sonic realizing this and chasing after him. Sonic searches for him in a cave, and he shows his almost-entirely-naked body to Sonic, whom is utterly mortified by such an image.

Eggman then wonders how the block works, and ends up hitting it with his crowbar, producing a Rock Wizard, the Bad Star and the Weegee Board, all of which he throws away. He gets extremely frustrated with the block, thinking that it would produce gods for him to summon and destroy everything. He hits it and throws it on the ground, causing a strange character (Lord Crump) to appear. Eggman introduces himself to this strange character, whom doesn't accept him and calls himself Dr. Pootis. Eggman and him begin to form a rivalry and each get their robots and fight each other.

Sonic in the meantime has been searching for Eggman this whole time after his moment of mortification (due to the naked Eggman image) and notices him and Pootis fighting. The block is thrown to him and he watches the two fighting. Sonic notices it shaking after a while and Professor E. Gadd comes through the block in a video image. The two evil characters continue their fight while E. Gadd warns Sonic that the item block is not of his universe's origin, and that it has traveled through time and space, and because of its travel, it is unstable and anything can happen. The fight escalates in the background, and E. Gadd also reveals it got there thanks to the actions of Mario pushing it into an invention of his own, to which Mario objects in the background. Both sides begin to get reinforcements which collide with each other. E. Gadd tells Sonic to hide the box in an unreachable spot, because if anything were to happen to it, "unimaginable things would happen!" and E. Gadd ends his call.

The two robot-controlled mechs fight through chess, and Eggman takes this chance and rams into the other mech in the direction of the block and Sonic. Sonic yells out to them and they both fall short of the block, making Sonic feel relieved. However, Eggman with the other mech comes flying up and launches right into the block where Sonic is and it forms a portal. Sonic, remembering the things E. Gadd said, loses hope as the portal begins to vacuum everything inside of it. An error message pops up, and it shows that it was all a game being played by Pinkolol16, who swears in anger and ragequits.

Dr. Eggman then appears where the error was and actually fixes the world, which Sonic comments on. Eggman then suddenly appears near Sonic, and shows that he didn't just revive the world, he changed it to his own way, as the video ends with a supposed title screen of the game named Revenge of the pingas, with Sonic screaming in horror.

The supposed title screen of Revenge of the Pingas. 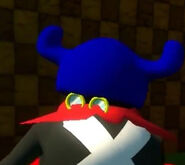 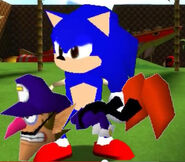 The return of the Waluigi Launcher.

Dr. Eggman being attacked by Tails.
Add a photo to this gallery

Retrieved from "https://supermarioglitchy4.fandom.com/wiki/Sonic_the_Derphog:_The_Item_Brick?oldid=143967"
Community content is available under CC-BY-SA unless otherwise noted.