SuperMarioGlitchy4 Wiki
Register
Don't have an account?
Sign In
Advertisement
in: Featured Articles, Articles without infoboxes, Food,
and 5 more

Spaghetti Is an Italian food that appears in both The Real World and the Mushroom Kingdom. In both SMG4's universe and the Nintendo canon, it is Mario's favorite food; they commonly appear in SMG4's videos, and most of those times they're eaten by Mario.

The reason why it is Mario's favorite food and why he eats it all the time and is addicted to it is because, as shown in "The (TOTALLY ACCURATE) Documentary of Mario", Mario saw a lady while he was in high school, and seemingly fell in love with her however she walked away and left her spaghetti plate on a table. Mario immediately falls in love with the spaghetti and since then he has been addicted to it and eats it all the time, being his favorite food.

However in SMG4: Mario Babies a plate of spaghetti was on the table when mario was in preschool a koopa shell knocked it down and baby mario ate it claming it to be his first spaghetti meal and falling in love with spaghetti becoming his favorite food.

It had gone to the point where he developed a sexual attraction towards spaghetti rather than human beings. He has asked a male body pillow with a spaghetti face in various Valentine's Day-themed bloopers and married it in Doki Doki Mario Club.

Spaghetti as a Gmod model 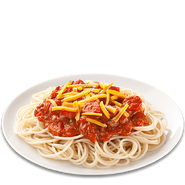 The thumbnail of Smg4's 20,000 sub special How to Make Spaghetti