SuperMarioGlitchy4 Wiki
Register
Don't have an account?
Sign In
Advertisement
in: Article stubs, A to Z, Characters,
and 9 more

??? (before he reveals himself)
SMGay1

probably 18 or older, since he's hosting a rave

SuperMegaGangsta1 (also known as SMG1) is the shadowy leader of the Super Mega Gangsta Club, dressed exactly like SMG4 and the other SuperMegaGangstas.

His sole appearance was the blooper Super Mario 64 Bloopers: S.M.G Club, where he ripped off SMG4's style to make his "evil" club more popular. In the end, Mario and SMG4 dismembered him after self-destroying the club, and renamed him SuperMarioGay1.

Desperate for attention, he stole SMG4's whole design just to make people go to his club because it looked cool, but overall he's pretty normal, besides him having a self-destruct button for his club.

SMG1 in his current form appears to be N64 SMG4, but with black skin. 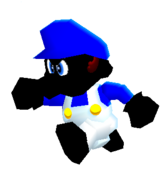