SuperMarioGlitchy4 Wiki
Register
Don't have an account?
Sign In
Advertisement
in: A to Z, Characters, Incomplete,
and 12 more

SMG4: Mario And The T-Pose Virus

A character model's default position being the T-pose

T-Pose Zombies are zombified characters stuck in the "T-Pose" reference pose that attempt to infect the entire Mushroom Kingdom. They served as the secondary antagonists of The Waluigi Arc.

T-Pose Zombies are formed through a virus that has four vectors of transmission: being infected by a T-Pose Zombie, struck by lightning from Waluigi's Staff of Rejection, consuming a poisonous T-Pose Shroom, or being in the radius of an exploding T-Pose Shroom.

In the SMG4 series, T-Pose Zombie outbreaks have occurred twice, and both were directly caused by Waluigi.

Public reaction to the Zombies has been catastrophic, ranging from the panicking civilians, to hopeless cops, to the near destruction of the Mushroom Kingdom.

T-Pose Zombies appear to be almost completely devoid of personality, instead being a mindless force concerned solely with the propagation of their kind by killing anything that is not a T-Pose Zombie. Meggy is an exception, as she was saddened by the actions of Tari and even tried to hug her. T-Pose Zombies rarely (if at all) demonstrate any form of intelligence, doing little more than simply chasing a target for infection, which makes them even dumber than Mario. Owing to their low intelligence, T-Pose Zombies do not change their expression at all, even when being assaulted or capturing a victim, showcasing their lack of conscience.

Despite this, they can sometimes display minor emotions, showing that their mind is not completely erased during their transformation, as was shown with Meggy when she shed a tear while being hugged by a sobbing Tari. This implies that their consciousness is buried deep within their minds and it's possible to get through to them emotionally by reminding them of their personal memories.

T-Pose Zombies do not put their arms down for any reason, and in fact appear to be completely incapable of having their limbs moved at all, as seen when Meggy attempted to fight her way out of a T-Pose Zombie horde. T-Pose Zombies also appear to be extremely resistant to any form of damage and might not even feel pain, as they quickly got back up after Meggy knocked them all down during her fight in Peach's Castle in SMG4: Mario And The T-Pose Virus.

The T-Pose Zombies first appeared in SMG4: Mario And The T-Pose Virus.

The first known major outbreak of T-Pose Zombies occurred in their debut appearance and was caused by Waluigi, who encountered Shroomy in a forest and conjured a T-Pose Shroom using his Staff of Rejection. Waluigi commanded Shroomy to eat the T-Pose Shroom, to which he happily obliged, turning him into patient zero for the T-Pose virus.

Afterward, the infected Shroomy went to the castle, where he infected SMG4 and Toad, so Mario and Luigi went upstairs to warn Fishy Boopkins, Meggy, and Bob Bobowski about it, only for the T-Posers to infect Boopkins, despite his protests. Meggy attempted to fight them alone as Bob refused to help her, only for her to get infected into a T-Pose Zombie too. Bob then went to the Tick Tock Clock room with the Mario Bros., but before they could formulate a plan, the zombies broke into the room, and the Garo abandoned them to escape to the roof, much to Mario's anger.

Unfortunately for him, Shroomy had somehow infected numerous people, resulting in the castle being surrounded by T-Posers, and as such, Bob wasn't able to jump off the roof and instead had to block the door to keep the zombies at bay. Mario and Luigi wanted to get in for safety, but Bob repeatedly declined and told them to die quieter despite their begging. Fed up, Mario used his "Fat Powers" to break down the door. However, as Mario and Luigi celebrated, the T-Posers infected Luigi. Mario angrily kicked Bob off the roof for his punishment, after which he was presumably infected. Unfortunately, the roof was now loaded with zombies who were preparing to attack the shocked Mario, but Peach Toadstool (who knew about the virus and was prepared for it) showed up in a helicopter and saved him by knocking down and curing the T-Posers with 1-Up Mushrooms, ending the outbreak.

Another outbreak started in SMG4: The Mario Convention! at the Glitchcon convention center, when Meggy and Mario went up to talk to "Hideo Kojima" (actually Waluigi in disguise), whom after Mario told him to see Luigi, held up a purple mushroom that had been primed to explode in order to turn everyone into his own personal minions. Meggy then ran up and sacrificed herself to save the panicked plumber as it detonated, becoming patient zero for the second outbreak with some other convention-goers, much to Mario's horror.

It was also revealed that the zombies are now immune to the 1-Up Mushrooms, as Waluigi was now so powerful that he was able to create a new strain of the virus that was immune to any cures, unless they destroyed the Staff of Rejection. As everyone (except Tari who was unaware of the outbreak but remained hidden) fled Glitchcon, Waluigi used his Staff of Rejection to spread the virus and infect as many people as he could, including Luigi. By the end of the day, he managed to amass a very sizable army of T-Pose Zombies that he planned to unleash upon the world as revenge for always being hated and rejected by others.

In SMG4: Mario and the Waluigi Apocalypse, the majority of this army was unleashed from the convention by Waluigi, and had begun to wreak havoc on the Mushroom Kingdom, spreading the T-Pose Virus all over the kingdom for the second time; meanwhile, Meggy, Luigi, Bowser, Master Hand (who had been mind-controlled), and a few other T-Pose Zombies remained inside the convention center as they'd been assigned to guard Waluigi's Staff of Rejection. Tari, having finally emerged from her hiding spot, stealthily grabbed Meggy from the crowd and tried to bring her back to her former self by reminding her of the fun times they'd had together. When this didn't work, Tari hugged Meggy and mourned the loss of her friend, causing Meggy to shed a tear; this was the first instance of a T-Pose Zombie showing any sign of emotion. Shortly after this, Mario, SMG4, and Saiko Bichitaru (who only wanted to help because the zombies paid no attention to her) fought their way through the T-Pose Zombie army using SMG4's Deathbus and were able to show up into the convention center. They proceeded to reach for the Staff of Rejection, only for Waluigi to move it away from them and turn Saiko into a T-Pose Zombie after capturing her with Master Hand. Subsequently, Waluigi then told Mario and SMG4 that his "set" of T-Pose Zombies was nearly complete, and then made the two vanish with his staff.

In Fishy Boopkins Plays VRChat which was set during The Waluigi Apocalypse, the T-Posers make another appearance where they're seen chasing FightingMario54321 and infecting him off-screen, while Fishy Boopkins is horrified at the events. He then decides to play VRChat until the apocalypse ends, but when he goes to sleep in-game, he finds Waluigi at his doorstep, and the video ends with Waluigi infecting Boopkins.

They made their final important appearance in SMG4: War Of The Fat Italians 2018, where Waluigi temporarily turned them back into normal people specifically just for SMG4's and Mario's challenges. After SMG4 destroyed the Staff of Rejection with help from Tari, all the zombies were permanently turned back into their normal selves, ending the second and final outbreak.

Since then, the T-Pose Zombies have only made small cameos in SMG4: Mario's Late! when Mario appears in a T-Pose briefly before being slapped, SMG4: War On Smash Bros Ultimate, where Tari held out the magic controller she used to control SMG4 in SMG4: War Of The Fat Italians 2018 and it so happens that he ended up in a T-Pose state, SMG4: Mario and The Diss Track, where Luigi was in a T-Pose during Bob's diss track on his friends, and WOTFI 2020, when Hal Monitor kicks Saiko Bichitaru, she could be seen T-Posing.

T-Pose Zombies have the following traits:

War Of The Fat Italians

Known Victims of the T-Pose Virus

Shroomy outside the castle

SMG4 is the next to be infected

Dong could not expand

Bob falls into a sea of zombies

Meggy is Patient Zero of the 2nd outbreak

A T-Posed Meggy with Waluigi

Mario uses 1-up, it's not very effective

Waluigi with his army

Mario has been captured

Is it all over for the spaghetti loving plumber in red?

And joins the fellow T-Posed zombies 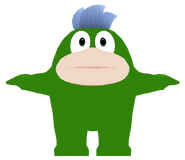