SuperMarioGlitchy4 Wiki
Register
Don't have an account?
Sign In
Advertisement
in: A to Z, Characters, Minor Characters,
and 7 more

For other characters that are referred as Guy', see Guy (Disambiguation).

TheBrandonMaster
Japanese Guy? (When he is talking)

TBM (also known as Crazy Japanese Guy) is a minor character and YouTuber in the SMG4 series.

TBM with EYF, GageDawg, X, FM, SMG4, ADD, RM on a tree, and MCG as audience members listening to The President 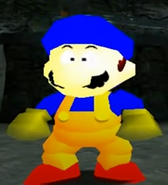