Team Killer Ink are the main antagonistic rivals of Meggy's Destiny. They are a group of rival Inklings to the Splat Squad and one of the many Turf War teams who competed in the final Splatfest event.

It is implied that they are discriminatory to humans, as they mock Meggy and her friends and refer to them as "humans" rather than their actual names.

They're willing to win and they will do anything to make Meggy and her teammates lose.

It is likely they dissolved as there are no more Splatfests after the final Splatfest event.

This super squad has always ranked highly in past Splatfests. Prepared to kick down any team standing in their way, Killer Ink might be a crowd favorite but will no doubt be every competitor's worst nightmare.

They have been known to be one of the best known turf war teams and became past Splatfest champions prior to the plot of the film. They introduced themselves to Splat Squad by their leader of Team Killer Ink, who taunted them as "Humans", commenting that Splatfest would "let anybody into Splatfest these days". Meggy restrained herself from engaging in conflict with them, as it was explicitly stated that fighting during Day 1 was not allowed, but Mario flipped them off anyway.

The first round consisted of an obstacle course that the team has to overcome. At the end of the course, where the competitors must jump over a chasm to make it to the goal, the rest of the Splat Squad make it over with ease thanks to their Ink Boi 3000s. However, as Meggy prepares to jump over, Killer Ink's Leader charges towards her and pushes her in while she and her team jumps over. Meggy managed to get over to the goal, Meggy and Mario starting attacking them after showing no good sportsmanship, but Marie and Callie told them they will be disqualified if they done this again leaving Leader and one of their teammate unconscious.

Team Killer Ink later appear during the second round, where it is revealed that they have already won the first match of the second round and will proceed to the final round.

Later after The Ink Brigade was disqualified for cheating during the second match and Team Splat Squad get their chance to go to the finale, both teams fight in the final round which it will be a Turf War, of course the Splat Squad with the help of their Ink Bois outsmarted them, but after each of Splat Squad are splatted and Meggy is alone they surrounded her but Meggy outsmart them again and use her Splatbomb to do a triple kill and run after Leader who change into a squid when Leader ask Meggy if she's already tired, Meggy defeats her by shooting her after kick her gun and go help her team against the other members.

After Meggy knocked out the remaining Killer Ink members and encouraged by her confidence, the Splat Squad regained their lost territory, winning the Turf War. And the Splat Squad became champions of the final Splatfest. Team Splat Squad celebrates their victory much to Killer Ink's dismay and frustration to lose to a team of humans. 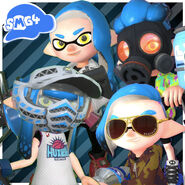