The YouTube Arc (miscapitalized as the Youtube Arc), also known as the Snitch Productions Arc, SMG3 Takeover Arc, or simply the SMG3 Arc, is a science fiction crime adventure comedy-drama story arc on SMG4's channel. It is the fourth major story arc in the SMG4 series after the Waluigi Arc, the Rapper Bob Arc and the Anime Arc. It is a series of videos involving SMG3 forming his own company Snitch Productions and stealing the YouTube Remote, aiming to use it to erase the SMG4 crew and Susan Wojcicki from existence. Now it is up to the stupid Italian plumber, Mario to stop the Snitch Productions and save the SMG4 and the YouTube Channels before it's too late. This is considered the third darkest arc in SMG4 history, only behind the Anime Arc and Genesis Arc, due to the main characters were sent to the Internet Graveyard in "SMG4: Deleted".

Warning! This article contains spoilers. Continue reading at your own risk. If you want to see the list of episodes, go here.

After the cancellation of Dr. SMG3 on MKTV, SMG3 started his studio called Snitch Productions (parallel to Luke Lerdwichagul's real-life company Glitch Productions) and making an insult to his rival's other studio. He invited Mario as his guest star for his production.

After SMG4 watched SMG3's videos on YouTube, he went to stop SMG3 and believed that it was another one of his evil schemes. Afterward, SMG3 revealed that he never had an 'evil plan' after all, and lashed out his hatred of him ever since they went to meme college, where he was pushed over by the latter's popularity. SMG3 finally had enough and declared that he would come back again, now truly evil, as the world really sees him.

At YouTube HQ, Susan Wojcicki was watching videos from her meme playlist and accidentally dropped her YouTube Remote due to the autoplay function.

Meanwhile at Peach's Castle, Mario and Luigi were fishing when the remote fell and reversed the action. Mario started by pressing the buttons and torturing him. Luigi begged Mario to stop, but to no avail. As Mario enjoyed what was happening with the other functions, Mario took the remote and had a lot of fun with it until he accidentally broke the remote stopping time. Fortunately, after he threw the remote down, time was resumed and Susan realized Mario was messing with her remote so she went out to stop Mario.

She and Mario had a big fight until Dr. Kawashima came to his aid and managed to beat Susan but she took the remote back to prevent any more damages. Dr. Kawashima proceeds to return Mario back to 2020 and undo all the damages he did, having a friendly talk with Mario along the way to a white portal.

S̶M̶G̶4̶: I Can't Believe It's Not SMG4!

Meanwhile, SMG3 started to get a team by starting an audition for a play, while being disguised as a Cromulon from Rick and Morty. Eventually, he has found seven of his teammates, Mario, Belle Fontiere, JubJub Boopkins, Rob the Scarecrow, Whimpu, a Luigi Doll, and Melony.

With the team set up, he had several plays that were parodies of the previous SMG4 shows, causing SMG4 to confront SMG3 about it. A fight then ensued between both gangs until Mario called for a truce. Both sides agreed but SMG3 quietly admitted that he would still want to kill SMG4 a little. The two gangs then went on their own ways.

At the YouTube Headquarters, where Susan Wojcicki is shown watching more YouTube videos, she decides to make the video more interesting by sending Mario to various dimensions that represent classic arcade and video games of the '80s and '90s as her own to punish Mario for what happened two weeks prior. Amidst the dimension hopping, Mario accidentally kills Greg The Alien, which would haunt him for a while.

After much time travels, Susan finally got bored and released Mario, taunting him before leaving. Mario calls her a b#!ch in retaliation.

Stealing the Remote for Evil

SMG4: Mario VS Youtube and SMG4: The Internet Graveyard

At SMG3's castle, the gang is working on a plan to steal the YouTube Remote from the YouTube headquarters. SMG3 had Mario join in with the plan to get that remote by making him remember that during his trip into other games due to Susan, Greg the Alien was murdered by his hands, convincing Mario that taking the remote would help avenge him. They tried to get the remote but failed. Fortunately Anti-Shroomy appeared with the remote, and gave it to SMG3. However, Mario felt betrayed by SMG3 after he discovered that the latter was planning on using the remote to delete SMG4 from existence. Not only did SMG3 summon the Content ID to kidnap and send Mario to the Internet Graveyard but he also sent Luigi to the place as well.

Once back in SMG4's room, SMG4 asked about how they got there and Mario told him the whole events from what happened. Knowing SMG3's evil plans, Mario and SMG4 decided to call the gang to stop SMG3 and the Snitch Productions from deleting SMG4's channel.

Two weeks later, SMG3 and his gang, except for Anti-Shroomy, plans to get rid of all the characters that Mario has ever met since 2011. Using the YouTube Remote as the source of power, it enables one to time travel back to a segment of time, and alter the past, demonstrated by throwing a Teletubby into the video, R64: the Toad, the Fat and the Ugly., and kicking Frankie out of the sight, thus sending Frankie to the Internet Graveyard.

SMG3 assembled everyone to the videos where Mario met his friends, ranging from 2011 to 2018 including the new fan made video for Luigi. As SMG3 headed for Account Loss, he was hit by Fishy Boopkins, who was thrown by Mario, who came with SMG4 and the rest of the gang to attempt to stop him. As SMG4 and the others travelled to their debut episodes, Mario was ordered to remove the YouTube Remote from its power source, but failed relentlessly.

All of the gang did try their best to stop their counterparts from altering the past but failed and thus, sending them to the Internet Graveyard including Susan Wojcicki. With all of them and Susan sent to the graveyard, Mario is left standing, knowing that this is the beginning of the doomsday.

A Last Hope; Taking Down the Snitch

With SMG3 and his gang altering their histories, SMG4 and his gang resides in the Internet Graveyard, along with Susan Wojcicki. They called Mario and give him a mission to retrieve SMG3's phone that has access to the channel's hacked account in order to re-upload the debut episodes they appeared in, to get out of the Graveyard and get back home.

Back on earth, Mario encounters SMG3, who usurps Peach's Castle and starts to battle him. After getting close enough, Mario jumps and tackles SMG3 to a nearby rooftop. Mario tells him it's over, only for him to notice that the Luigi Doll has the remote, and the doll summons countless Content IDs. SMG3 claims that he has already won as Mario is grabbed and pulled into the vortex.

As the gang awaits their Italian friend at the Starbucks, Mario lands in the center of the room. As they ask if he received SMG3's phone, Mario then stands, and his face is shown to be smiling as he shows the phone in his hand, having managed to pickpocket it as he tackled SMG3. As his friends smile, Susan exclaims its time to return home to stop SMG3 and his gang as SMG4 uses the phone to bring everyone back to real world, thus the final battle has begun.

SMG4, Mario, Susan, and the gang return from the Internet Graveyard as SMG3 tries to film another video. Later, as SMG3 is pinned down by Susan, he presses the "Factory Reset" button on the Youtube Remote. This causes the spirit of the remote to possess JubJub Boopkins, ordering SMG4 and SMG3's gangs to compete in a series of challenges.

After the challenges, SMG3 threatens to drop Fishy Boopkins off a building, demanding the Youtube Remote. JubJub Boopkins then coughs out the remote after fighting its influence, leading to a rap battle as SMG3 catches the device. During the rap battle, SMG3's gang is convinced to side with SMG4's gang and turn against SMG3.

At the end of the rap battle, with SMG3 defeated, SMG4 unfreezes Susan so she can send SMG3 to the Internet Graveyard and feel what it is like to live in this horrible place as a punishment for using the remote for evil and for sending her and SMG4's Gang to the Graveyard. Subsequently, Susan promises to demonetize SMG4's videos a little less often as SMG4's gang and the former members of the SMG3's Gang celebrate their victory and friendship.

Meanwhile at the Internet Graveyard, SMG3 starts to make a podcast by interviewing an Ugandan Knuckles, only for him to be attacked by it. What happens to SMG3 thereafter is unknown. 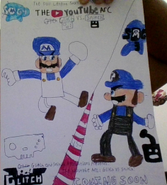 The first banner change after SMG4: The Internet Graveyard was released

The second change after SMG4: Mario VS Youtube was released

The third change after SMG4: Deleted was released.

The fourth and final change after SMG4: A Totally Normal S̷͍͖͉̙͚͎̑̃̿͑̆̇̚͠M̸͇͇̦̮̌̿Ğ̴̫̗̖͎͔̳4̶̞͇̰̎̀́̚ Episode