SuperMarioGlitchy4 Wiki
Register
Don't have an account?
Sign In
Advertisement
in: Articles with unofficial names, A to Z, Characters,
and 20 more

SMG4: Mario Gets His PINGAS Stuck In Car Door

Spaghetti, Chocolate (keeps shouting about it)

turned into tubby custard and spagetti

"Having fun down here, Italian??"

Tubbie Wonka is a Teletubby that appears in some of SuperMarioGlitchy4's bloopers. He is the owner of Fresh Spaghetti Tubbie and has several workers who work for him. Most are retarded and some even like to sing Oompa Loompa songs. Mario kills him by kicking him into a spaghetti maker, where he and the Tubby Custard, the sole ingredient of the factory's spaghetti, overload the machine and therefore causing the factory to explode. However, Tubbie Wonka seems to have survived the explosion, as he also made other appearances and cameos after this blooper. 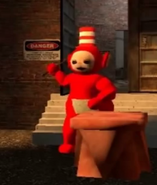 Tubbie Wonka coming out of the spaghetti factory on opening day 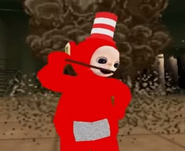 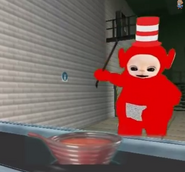 Tubbie Wonka with a gun

Tubbie Wonka with a crowbar