Will from Afar from AcapelaGroup/AcapelaBox

Ultimate Diss Track is a rap song made by Bob Bobowski that was featured in SMG4: Mario and The Diss Track. He performs his rap to insult and betray his former friends (with the exception of Saiko) by humiliating and ranting on them, ultimately leading them to get back at him.

Sit down folks,
Let me tell ya a little story.
About the time,
Before all my sexy glory...

I knew a group of people
That was just so irritating
As soon as I met them,
My life became devastating

First was Mario a fat ass b****;
His pasta fetish made me wanna put him in a ditch.
Then there's Luigi now, he's just dead weight
Oh yeah, then again, he was easy to manipulate.

Don't get me started on the annoying squid girl,
the sound of her voice was like screeching metal.
There was this blue haired chick, but I forgot her name,
When I think about it she couldn't shut up about games.

Toad and Bowser, what a waste of space,
SMG4, an unfunny disgrace.
Then there was this green turd, oh god why?
His love for anime made me wanna die! 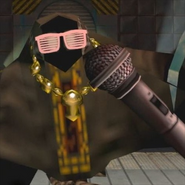 Album of the song