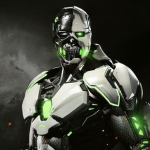 After being killed, has come back to life due to popularity causing multiple error of continuity which writers don't want to clarify

"Louis" better known as Zomlouis is a mysterious character that appeared on multiple wikies. Not much is known about him and nobody knows his real name. The little info on him aren't that relevant to uncover his identity.

"Zomlouis" has appeared for the first time on the Injustice wiki adding some info about Injustice comic characters. Then someday, he decided to work on multiple comics related wiki such as the Arrowverse wiki, the MCU wiki, the DC database and the SUOMC wiki before leaving everything for an admin position in the DC Multiverse but after an incident it was closed causing the staff including Zomlouis to move to Miraheze. Now, their site is called DC Multiverse Wiki but it's on Miraheze and Zomlouis has been there ever since. Despite this, when he is not on Miraheze he works on the SMG4 wiki due to him having been there in the past a few times but now it has become the only fandom wiki he visited.

There is nothing known about how he looks like. What it's certain, it's that he is a young man that lives in France.

Retrieved from "https://supermarioglitchy4.fandom.com/wiki/User:Zomlouis?oldid=330920"
Community content is available under CC-BY-SA unless otherwise noted.