SuperMarioGlitchy4 Wiki
Register
Don't have an account?
Sign In
Advertisement
in: A to Z, Characters, Unsatisfactory,
and 9 more

"Did somebody say wizard?"

Wizard Rock is a classic recurring character in the SMG4 series.

As his name implies, he is a sentient rock with magical wizard powers. He often appears dressed as a wizard, and is referred to as such by the subtitles in these cases.

Wizard Rock is a grey, non-symmetrical polygon. With his right side facing the viewer, as in the image above, he has a concave chip near the left cheek, and a large amount of body mass on the right. Wizard Rock's eyes are composed of two largish dots high up on to his body. His mouth is slightly lower than the center of his body, and appears to be a freehand line segment drawn slightly wavily. He wears a purple wizard's cap with yellow stars on it, and carries a wand with a blue gem at the top. In SMG4's mind, he also has a full body wearing a wizard's cloak.

Wizard Rock first appeared in the episode "Super Mario 64 Bloopers: The SwitcherooOveralls", where Nintendofan997 (dressed as Luigi) asked Toad if he wanted to switch characters like everyone else. Once Toad agreed, X swapped him with a rock. Later in the blooper, Toad (as the rock) asked for X to throw him in the trash can, but X accidentally threw him into Bowser's Lair. Consequently, X picked up a replacement rock.

Wizard Rock later appears in many other bloopers; usually dressed as a magic wizard who tries to help Mario, but fails spectacularly. Whenever magic or wizardry is referenced in a character's dialogue, Wizard Rock appears in his wizard outfit and performs his magic.

He also makes appearances as a projectile thrown by a character, suggesting that Wizard Rock is nearly everywhere.

On occasion, Wizard Rock can be spotted making a cameo appearance, and as a background prop. Wizard Rock also appears to have teleportation powers, as he can appear in several impossible locations.

Currently, it is not known whether rock possesses magical powers, as he can perform many otherwise impossible tasks. 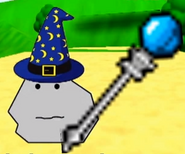 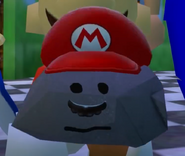 Rocks as a baby.

Wizard Rock with a body.