SuperMarioGlitchy4 Wiki
Register
Don't have an account?
Sign In
Advertisement
in: A to Z, Characters, Recurring Characters,
and 10 more

"There’s a snake in my boot!"
"Sombody's poisoned the waterhole"
You're my favorite deputy"
Woody is a minor character in the SMG4 series.

He is a cowboy, and the main character of the Pixar "Toy Story" Movies with Buzz Lightyear. He is often depicted as a violent resident of the Mushroom Kingdom.

Woody is a cowboy, so he dresses like any cowboy: he wears a brown cowboy hat, a yellow shirt with red squares and cow patterns, brown boots, jeans, and a brown belt.

Created by Mario using a living spell on a Woody doll, he literally tried to kill the red plumber when he saw him.

He competes in the Olympics against Mario and the others.

Slenderman is seen drowning him.

The Mario Channel: Mario Vs Wild

Woody appeared when Mario sat on his eggs which made him mad and started chasing Mario but Mario fled. When Mario was picking berries, he saw Woody when he searched a bush so Mario walked away. Later Woody was fighting Sniper and won while Mario took Sniper's phone to buy a helicopter. Woody's design for this episode looks slightly different from his previous appearances.

He is seen in Bowser's dream in the audience. After Wario thinks Mario started a riot, Woody is seen fighting Dr. Eggman. In this episode, his design returns to his original look in Spells and Wiztards and Mario the Olympian.

Woody appears in Luigi's bar alongside many other people ordering some drinks there once again Woody's design is his usual design.

In this blooper, Mario portrayed him in the Toy Story segment.

He has his own booth.

SMG4: Mario and the Waluigi Apocalypse

He became a T-Pose Zombie in this episode and tries to attack SMG4 and Mario, but is knocked out by Saiko. Unlike other T-Pose Zombies, he was perfectly capable of speech.

SMG4: Mario and the Anime Challenge

He appears in a restaurant with Aku Aku.

He appears with the other False Anime Replicas.

SMG4: Mario Waits in Line For Some Spaghetti

He appears waiting in the line for the bank. cut in front of Woody by making him believe that he was sexually violated by Crash Bandicoot, who was behind him. Woody proceeded to attack Crash Bandicoot with a baseball bat.

SMG4: Lord Of The Memes

He makes a cameo at Dashcon.

A picture of him is shown by Kermit as a example of being happy.

He makes a cameo frozen in time.

He is one of the characters Mario jumps across Mount Doom.

He is one of the contestants.

He appears in Captain Dexter's skit, where he goes to jail for insulting Boopkins.

SMG4: The Pursuit of Happiness

He appears in a restaurant with Aku Aku.

He appears in the line for Mario and Bob's hotel.

SMG4: If Mario Was In... Poppy Playtime

He appears in the factory's introduce and Make-A-Friend video.

He is a member of the Human Resources Club.

He is accidentally turned into meme energy.

He is seen watching a Christmas musical at Omnia Academy.

He appears in the lunchroom.

He appears at Melony's graduation.

Woody before his transformation.

Woody after his transformation.

Woody about to latch onto Mario.

Woody on a Luxo ball. 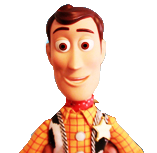 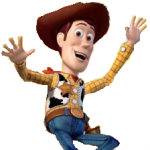